Dolly, technically a pony, but acts like a horse. She has the sweetest smile and endearing eyes. Dolly loves the show ring. She is somewhat retired, but when shown in 4-H she could literally do it all. She was a halter pony, western, English and contesting. She is a great listener and has helped many clients gain trust and improve communication.

Meet Chief. He has been with the Porter family since 2002. He may be small in stature, but he has a big attitude and heart to match. Chief was headed for the auction block, but instead he was adopted by the Porter family as a 4-H project. Chief was lightning fast back in the day and especially excelled in the flag race and barrels. He is also an excellent trail mount and will fearlessly lead the herd down the trail. He likes to socialize and loves people. He’s a little pushy, so we need to be very clear with boundaries. 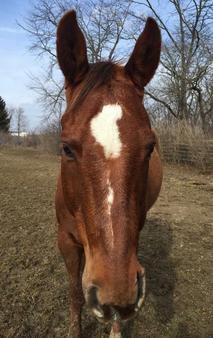 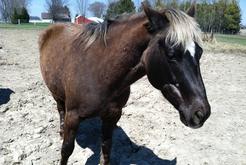 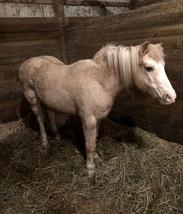 And we have Boomer, registered name Raffles Tusk. He’s been with the Porter family since 2004. Trained primarily to be a barrel horse, he decided he didn’t like the show ring. Instead he has become our #1 trail horse. Boomer loves to lead. He used to be a little “spooky”, but with time has learned to trust the humans and now takes things in stride.